The ANSUL LVS (Liquid Vehicle System) fire suppression system is a versatile stand-alone liquid agent system that can be used to protect vehicles in various industries including mining, forestry, construction and transportation.

The wet chemical agent used in the ANSUL LVS is a unique blend of organic and inorganic salts, coupled with surface active agents. If a fire occurs on a vehicle, the ANSUL LVS system detects and releases the suppressing agent onto the fire to interrupt the chemical reaction that supports combustion. Due to the agent’s liquid form, it can easily flow into areas where flammable liquids settle. The agent’s water content assists in cooling the fuel and any highly heated surfaces, further aiding the suppression of the fire, and minimising the chance of re-ignition. To further reduce re-flash potential, the agent also forms a film over flammable fuels.

The ANSUL LVS has been proven to be highly effective on Class A and Class B fires and is CSIRO ActivFire™ listed as being compliant with AS 5062-2006. With its rugged steel construction, corrosion resistant paint and operating temperature range of -40° to 60°C, the ANSUL LVS is ideal for harsh Australian environments. The proven technology of the external gas cartridge provides constant nozzle pressure and a full discharge pattern throughout the duration of discharge for effective fire suppression. In addition, the LVS agent does not need to be changed annually as a result of its pre-mixed solution, saving cost and minimising operational disruption for owners – this is known as a life-of-cylinder suppression agent.

The detection and control system used with the ANSUL LVS system is the ANSUL CHECKFIRE ASC-N Electric Detection and Actuation System which combines to provide automatic fire detection and activation. In addition, the ANSUL LVS is designed to be a stand-alone fire suppression system, but may also be used in a Dual Agent System, in conjunction with an ANSUL A-101 dry chemical system. 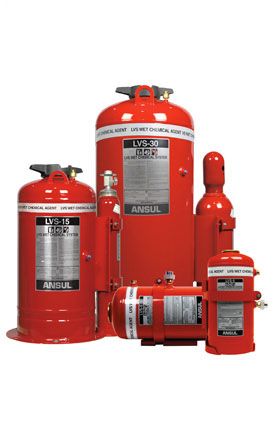