The ANSUL® R-102 pre-engineered kitchen fire suppression system is designed to combat the dangerous fires that occur in cooking appliances and ductwork in commercial kitchens.

The system can be installed directly into the hood and ductwork of your cooking appliances – completely out of sight where it will not interfere with the appearance or operation of your kitchen.

This system can be operated manually or will automatically detect and operate to suppress the fire in seconds. When the temperature in the hood reaches a predetermined level, ANSULEX® liquid fire suppressant is released through strategically positioned nozzles, reacting with the surface of the burning cooking oil to form a blanket of foam.

This blanket of foam smoothers the fire by both cutting off its air supply and preventing the release of flammable vapours. It also reduces the possibility of the fire reigniting while the cooking oil is cooling to below its auto-ignition temperature. With an almost neutral pH, ANSULEX® is also exceptionally friendly to your cooking equipment with minimal clean-up required.

For maximum protection and the most efficient set up, the ANSUL® R-102 can be installed specifically for your kitchen layout with nozzles aimed at designated hazards and appliances. Alternatively, nozzles can be lined up with overlapping agent discharge patterns, creating a virtual fire-free zone over the cooking appliances. 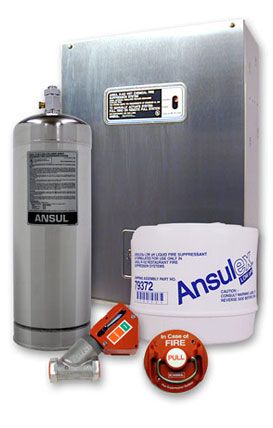