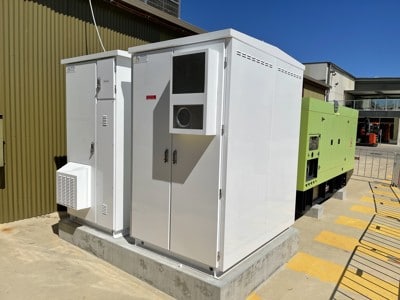 Lithium-ion batteries have cells that risk catching fire by internal overheating, for example due to a short circuit. While battery modules are designed to avoid this by performing early detection and shut down, if detection fails and the cell temperature reaches a certain limit, the cell can display a “thermal runaway” and catch fire. Therefore, localised fire detection and cooling are important aspects in lithium-ion battery fire mitigation.

To address the risk of fire from the use of lithium-iron batteries, Australian grid energy storage and microgrid control specialist, PowerTec sought an effective fire suppression system to protect its grid stabilisers and electric vehicle charger buffer batteries that are powered by lithium-ion batteries.  PowerTec and Wormald have been working together over a two-year period to produce a self-contained and pre-engineered fire suppression system to protect PowerTec’s unmanned energy storage and power generating sites from a potential lithium-ion battery generated fire.

As the use of lithium-ion batteries in power infrastructure increases in response to the ongoing change to renewable energy, technology advancements are also having a huge impact with more batteries with increased energy and power capability now able to fit into smaller spaces. When Wormald began working with PowerTec six years ago, large shipping containers were often used to house the significant number of lithium-ion batteries required to run power infrastructure, however today the compartments can be as small as a regular computer server.

FireDETEC is an indirect low pressure (ILP) fire suppression system that uses 3M Novec 1230 extinguishing agent that is UL listed and FM approved, making it suitable for electronic hazards. The 3M Novec 1230 is a fourth-generation extinguishing agent that is contained in a small, pressurised cylinder. When the FireDETEC pressurised tube detects a fire, the cylinder is activated, discharging the fire suppression agent directly onto the source of the fire. No external power is required as the system is entirely self-contained. It is also compact and lightweight.

The PowerTec project was unique as it required the Rotarex FireDETEC system to be fitted into the energy storage cabinets with given battery rack structures, which meant the system needed to be flexible.