A conversation with Barry Lee OAM

With a career spanning over half a century and a Medal of the Order of Australia in the General Division for services to industry (in the area of fire protection), Barry Lee OAM reflects on the significant changes and developments in Australia’s fire industry.

As a founding member of Fire Protection Australia and recipient of a United Nations Environment Program Citation of Excellence in recognition for his outstanding contribution to the protection of the Earth’s Ozone Layer, Barry Lee’s contribution to the fire industry and Wormald has been significant. 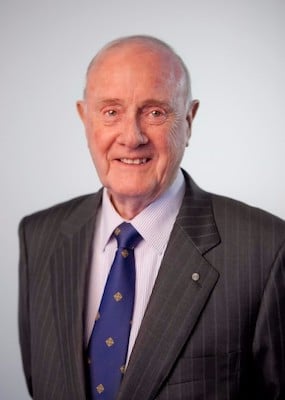 The Barry Lee Technical Excellence Award, sponsored by Wormald, honours his tremendous achievements over 50 years in the industry and is awarded to an individual in recognition for outstanding technical contribution to the fire protection industry. The 2019 Barry Lee Technical Excellence Award recipient will be announced at the Fire Protection Industry Awards on November 8.

How did you begin your career in the fire industry?

In 1952, I was studying mechanical engineering and working for an elevator company in Melbourne. An interface problem came up and I was sent to the company that supplied the elevator shaft’s fire protection equipment. That company turned out to be Wormald.  I was fascinated by the work Wormald was doing and applied for a position. I began as a draughtsman in the service department which was then an office of drawing boards and grey dustcoats. The service department was a great place to start; the sheer number and spread of clients provided more experience than any other department while the variety of work and the different customer processes provided an endless series of challenges.

Working at an array of locations, you couldn’t be afraid to get your hands dirty. Most jobs were measured in the field, hydraulics were manually calculated (there were one or two hydraulic slide rules), and sprinkler rules were all pipe schedule, essentially pre-calculated.

Of course, the drawing offices of the service department have disappeared today and it is now all CAD, computerised system calculations and electronic communications.

Can you describe the fire industry when you first started?

The fire industry was vastly different in those days but even then, Wormald was known as a well-established fire protection engineering firm with comprehensive fire protection products and services. There was competition, as would be expected, but Wormald was the principal automatic sprinkler installer, the clear leader in ‘special lines’ (now called ‘special hazards’) and a pioneer in many other areas.

How does this differ to the fire industry today?

In contrast, the fixed system business is today strongly contested with much wider ranging labour and contract complexities that can make it harder to generate a return on investment.  Even the post-installation service business can be challenging due to many smaller (often short-lived) competitors.

Another marked difference has been the emergence of ‘total package’ engineering and construction concerns which are apt to include fire protection in the range of offered services.  I think they often lack the in-depth fire protection knowledge and experience to support their proposals and they may not have the same sense of long-term custodianship.

Nevertheless, the Wormald ethos, experience, product range and outstanding service packages has always and will continue to stand it in good stead.

What major changes or milestones have you witnessed during your career?

The growth of facilities management businesses and purchasing agencies has changed the nature of communication between fire protection practitioners and customers. Similarly, the connection between management and line staff, which was very close in my early experience, changed during the acquisition/merger era, but is returning strongly today.

Wormald pioneered automatic sprinkler protection in the early Australian tall buildings, but the current high-rise business has become a patchwork of ‘engineered solutions’ frequently developed on the run – complicating the task of execution.

The development of Australian and international standards, which Wormald has had heavy involvement in, has brought some order to the industry and reassurance to clients.  In its own way, this activity represents an important milestone industry-wise.

From the technical standpoint, I can point to three significant developments during my service with Wormald:

Reflecting on your career in the fire industry, what are the personal highlights?

While I made numerous technical presentations around the world, my first address to the NFPA (National Fire Protection Association) Annual Meeting in Washington, DC on the Australasian sprinkler performance record was a highlight, as were my presentations in the Peoples’ Republic of China where I was part of Australia’s first exhibition in Peking in 1974.

Wormald Australia had good reason to be proud of its role in the Halon protection installations in the FFG-7 guided missile frigates for the USA and Australia. The technical team developed the military grade hardware package from scratch within a few months, and furnished systems packages for some 70 of these combat vessels.

My appointment as Technical Director Fire Engineering for the Wormald Group worldwide was also a personal highlight, marking the final destination in a fulfilling journey from draughtsman to technical director; albeit on the shoulders of many others.

What do you see as the biggest challenges facing the fire protection industry today?

The race to the lowest common denominator is dangerous. Maintaining proper fire protection engineering practice is clearly difficult in the face of irresponsible pricing policies (which may be short-lived but cause much damage in the longer term). This is particularly damaging in the case of critically important maintenance work.  There is also a sustained trend towards separate product supply houses and installation contractors. While there are some potential benefits, it militates against the provision of integrated fire protection solutions in the time-honoured Wormald fashion. It also hampers Wormald’s preferred approach to delivering the best protection for any given client problem.

One of the biggest learnings for the fire protection industry has been how to deliver effective fire suppression solutions without impacting the environment. Over the past 25 years, we have seen the impact of gases such as halon, a chemical compound previously used in suppression systems or portable fire extinguishers, but now recognised as a greenhouse gas. The industry has since moved to adopt the use of inert gases in suppression systems that help to protect the environment by diminishing the use of halon.

Many industries, including the fire protection industry, support the move towards fluorine-free firefighting foams. Both the Queensland and South Australia governments have also taken steps to reduce or eliminate the use of fluorinated firefighting foams within their jurisdictions, based on the environmental impacts created by PFAS substances.

Wormald is often referred to as a fire protection pioneer in Australia. Does your experience support that view?

It certainly does. Wormald pioneered automatic sprinkler and water spray protection in Australia among many other remarkable achievements including the following:

Throughout these milestones, a strong service culture was ingrained, foreshadowing the extensive and sophisticated service organisation Wormald operates today. Some pedigree!